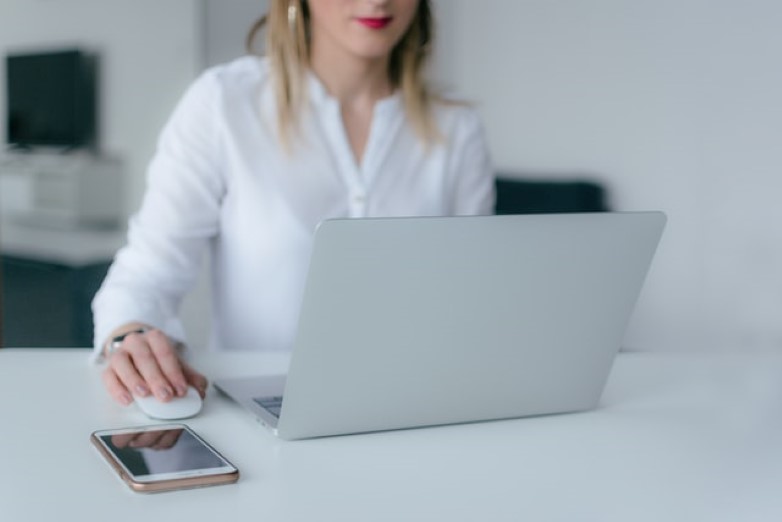 Paving the way for a more inclusive Industry 4.0

There is a significant gender gap that continues to exist in Science, Technology, Engineering and Mathematics (STEM) fields around the world. Even though we are seeing an increase in women pursuing these fields at a higher education level, they are still underrepresented post-graduation. With an aim to achieve full and equal access to and participation in science for women and girls, and further achieve gender equality and the empowerment of women and girls, the United Nations General Assembly declared 11 February as the International Day of Women and Girls in Science in 2015.

Why do we need better representation of women in STEM fields?

The world is currently undergoing a fundamental transformation that is changing the way we live, work, and think. The Fourth Industrial Revolution (or Industry 4.0) has far-reaching implications for the role of women in society. It’s crucial for women to have a stake in the digital economy to ensure that Industry 4.0 does not perpetuate gender bias. Women must contribute equally to big data or social media data to make sure their needs aren’t neglected in the future.

AI has the potential to be very disruptive now it has evolved to the point where it can not only treat information but also interpret it, through machine learning, deep learning, and natural language processing. There’s potential for information to be distorted and then relayed to the masses, via websites and social media. In a report on the Digital Revolution, UNESCO identified the very real danger that gendered differences will be magnified and embedded within technology. Yet, it’s also possible for virtual identities to be completely gender fluid, offering an opportunity for sweeping behaviour change and a blurring of the distinction between men and women in the virtual realm.

Avatars can walk, talk, and behave in gendered ways, and robots and automatons are programmed by men and women who (consciously or subconsciously) may give their creations gendered characteristics. For example, a robot designed to do household chores may be given a female shape and voice, paving the way for gender dynamics to be reproduced in the relationship between robot and owner (Schiebinger, 2019).

Already there are concerns being flagged about AI. For example, Google’s speech recognition software is 70% more likely to recognise male speech than female speech according to research conducted at the University of Washington. Another example is Siri, a servile female-gendered voice assistant created by Apple, used by hundreds of millions of people around the world. She was programmed to respond to insults with the words, “I would blush if I could”. The algorithm behind Siri has since been updated to react in a more gender-neutral way (UNESCO and Equal Skills Coalition, 2019).

Women are still a minority in the digital labour market. In the EU, more than 50% of men earning degrees in IT end up working in digital jobs, compared to 25% of women (UNESCO and Equal Skills Coalition, 2019). Women are also more likely to leave the tech field than men. The most common reasons given concern workplace conditions, a lack of access to key creative roles and a sense of ‘feeling stalled in their career’ (Ashcraft et al, 2016).

Although the top multinational technology companies are making progress, they are still not close to closing the gender gap in technical and leadership roles. This graphic taken from the UNESCO report on the Digital Revolution shows the striking disparity that still exists at the major global technology companies. 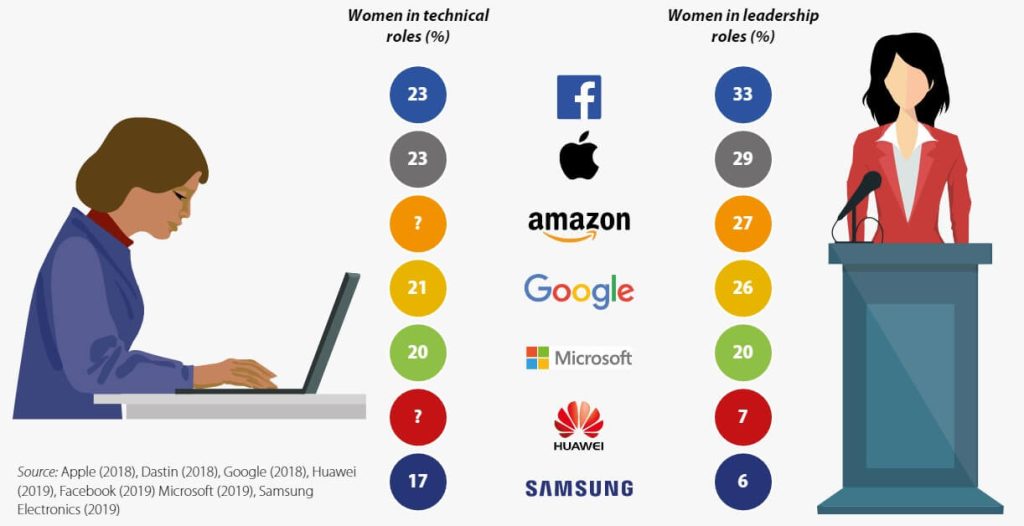 There is a similar trend in tech start-ups as well. The Silicon Valley Bank undertook A Women in Technology Leadership survey in 2019 to measure gender parity in start-ups in technology and healthcare in Canada, China, the UK, and the USA. It found 46% had no women at all in executive positions, and only 28% had at least one woman among the founders.

Another study showed that tech companies founded by women only received 2.3% of venture capital investment, according to the 2020 Women in Tech Report from TrustRadius, which surveyed 700 tech companies around the world.

Women remain a minority among inventors

Despite 2019 having marked a record high for the percentage of patent applications that include at least one woman, women still make up just 19% of inventors. Progress may be slow but at least it has been steady; women accounted for just 14% of inventors in 2013. The share of female inventors among patent applicants varies from one country to another: in 2019, the highest proportions of women were found in Iran (70%), Antigua and Barbuda (64%), China (55%), the Republic of Korea (51%) and Sri Lanka (47%). Countries with the lowest proportions were Serbia (7%), Oman and Romania (both 8%).

Fields related to life sciences have a higher uptake among female inventors. More than half of PCT applications included at least one female inventor in 2019 in the fields of biotechnology, organic fine chemistry, pharmaceuticals, the analysis of biological materials and food chemistry. However, their share remains below 20% in fields related to engineering, such as civil engineering (18%), mechanical elements (16%) and engines, pumps, and turbines (16%) (UNESCO Science Report, 2021).

Women remain a minority in STEM careers and especially in digital information technology, computing, physics, mathematics, and engineering. The very fields that are driving the Fourth Industrial Revolution and are likely to make up many of the jobs of the future. Governments, academic institutions, and corporations need to work harder to attract girls and women to these fields and, above all, retain them. Otherwise, progress towards closing the gender gap could be compromised.

Women scientists are a source of inspiration for young girls around the world eager to enter scientific fields. As we celebrate the International Day of Women and Girls in Science on 11th February, it is our duty to pave the way for them, to build a fairer and more equal future. In the words of Jennifer Doudna, laureate of the 2020 Nobel Prize in Chemistry, “I love the process of discovery.” For all girls contemplating a career in science, it should be as simple as that.

Many countries have launched gender-specific equality policies in science and engineering in recent years, signalling the topic is rising to the top of their domestic agendas. Many of these initiatives remain sporadic, fragmented, and limited in time and space but they are widespread. This dynamic gives cause for optimism. For more information on what countries and organisations are doing to address gender disparity in STEM fields, keep an eye out for part 2!

UNESCO Science Report (2021) To be smart, the digital revolution will need to be inclusive

UNESCO and Equal Skills Coalition (2019) I’d blush if I could: Closing Gender Divides in Digital Skills through Education

Schiebinger, Londa (2019) The robots are coming! But should they be gendered? Association for Women in Science Magazine