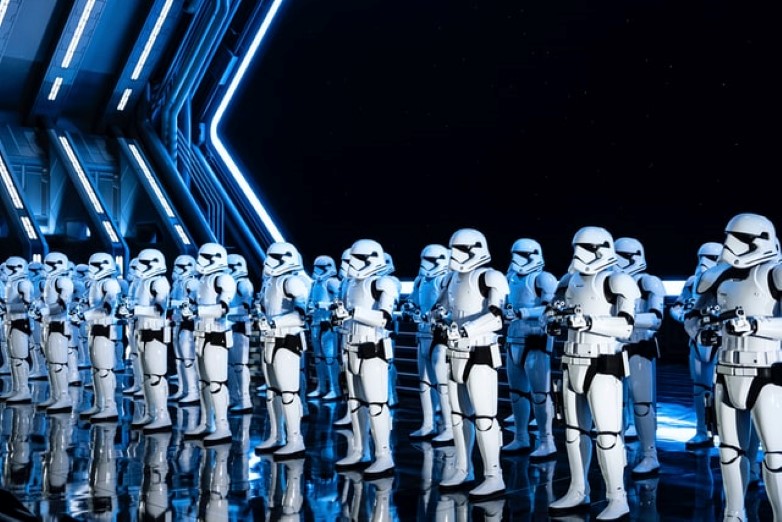 In Marvel’s Iron Man, Tony Stark builds himself an iconic powered suit to aid his escape from hostile captors. This suit gives Stark superhuman strength and the ability to fly, among other enhanced abilities.

In 2010, only 2 years after the first Iron Man film was released, a group of inventors at Ekso Bionics Inc. filed a patent for an exoskeleton that is to be “worn by a user to allow for lifting and lowering heavy loads in front of the user.” According to an interview with Wired Ekso Bionics started making load carrying suits for military purposes, but then pivoted to helping people with paraplegia walk again. Their latest project focuses on preventing injury of manufacturing workers who often carry heavy machinery. In the Wired interview Russ Angold, the CTO of Ekso Bionics, jokes that “there’s no laser beams, […] we don’t have the ARC reactor yet like Tony Stark […] well, we keep asking for it, but no one’s developed it yet”.

Never Let Me Go, the dystopian novel by Kazuo Ishiguro adapted for film in 2010, centres around the concept that with medical advancements, life can be prolonged to over 100 years by transferring younger humans’ organs.

Advanced Cell Technologies Inc., a biotechnology company founded by researchers at the University of Massachusetts, focuses on stem cell research for cloning and regenerative medicine. Their patent for cytoplasmic transfer details “methods for de- differentiating or altering the life-span of desired ‘recipient” cells'”. Cytoplasm is introduced into cells to produce embryonic stem cells, effectively regenerating the cell. Although this patent was filed before Ishiguro’s novel was published, Never Let Me Go theorises how medical advancements could prolong life by introducing young cells.

The Atlantean Demigod, Aquaman, created by DC comics, has super hero abilities including: superhuman strength and speed, ability to breathe underwater and above water, telepathic control of all aquatic life, and super fast swimming.

Honda Motor Co Ltd. filed a patent for an underwater scooter in Japan in 2004. The invention features a saddle for the rider made of two air tanks, a steering mechanism attached to swivelling rudders to adjust the direction of the scooter underwater. This invention allows an individual to travel underwater at high speeds, as Aquaman does.

The Force has many uses in Star Wars, from mind manipulation to foreseeing things that will happen in the future. Perhaps the most iconic use of The Force is to move objects telekinetically.

IBM has developed a “method, system and computer program product for decoding brain activity into a brain pattern sequence” for authentication to access a system. This means, unlike the retina, finger print, or hand scanners used in some science fiction films, this method provides even higher security as the password is a brain pattern sequence which is difficult to copy or imitate. Although this invention is more limited than The Force, as the user must be granted access to the system first, it only requires the concentration of the mind to unlock a system.

Back To The Future 2:

Marty McFly, Dr. Emmett Brown (Doc), and Marty’s girlfriend Jennifer, time travel from 1985 to 2015 in this film. When they arrive in the future, Doc hands Marty an outfit to help him blend in with the 2015 fashion. This outfit includes Nike shoes with power laces that tighten around Marty’s foot as soon as he puts the shoe on.

Nike Inc. has since continued to develop this technology and have even released Nike Hyperadapt, shoes with power laces that tighten around the wearers foot using buttons on the shoe or on a smartphone app. They call the self-lacing technology E.A.R.L, which stands for Electric Adaptable Reaction Lacing. The lacing mechanism is powered by rechargeable batteries, which typically last around two weeks, according to Tiffany Beers, Senior Innovator at Nike.

Science fiction usually involve ideas and technologies beyond our reality. However, just some years after being featured in movies, some of these ideas are inspiring real inventions and advancements in technology that were previously purely fictional.

This article features patent information from PatBase. You can view the folder containing the mentioned patents here, even without a PatBase account!

PatBase makes it easy to search and share high-quality, up to date patent information with anyone, using published links. To view even more information on these patents, there is a direct link to Snapshot, the quick, comprehensive analytics tool on PatBase.

To try a 2-week free trial on PatBase, please get in touch here.